With blessing of Lord Ganesh, shree Hindu Temple/ Mandir has started the first ever Ganesh Puran in the UK with offering of world record breaking 551kg ladoo.
The auspicious ceremony started at 8am with Ganesh Pooja in the Main Mandir Hall followed by procession and bringing of Pothi from main yajman’s house. 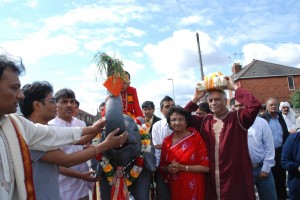 The procession started from the Mandir on St. Barnabas Road and went to junction of Kitchner Road and Green Lane Road. Procession started with offering of 5 coconuts and all devotees were blessed by the priest with cumcum and sweets.
Procession went on with music , preys and dances. All devotees wore traditional clothes, there were 51 girls, holding coconuts and copper pots on their heads. There were five cars in the procession, each car had different items for the commencement of the Ganesh Puran. First car had statue of Lord Ganesh, second car had the priest Shastri Shree Dilipbhai Joshi, singing sacred matra “om shree gum ganpataye  namah”. Third car had the “Pothi” – The Ganesh Puran sacred script. Fourth car had dandias, drums, keyboards and dhols for playing dandia raas. The fifth car was reserved for elderly who couldn’t walk.
The procession went past 3 round-abouts on the road, and on each roundabout all devotees played dandia rass while the Lord Ganesh sat in the middle.
Finally the procession came back to temple after 3 hour round trip. The pothi was brought into the mandir and was placed on the stage  that was set up. The Pothi was worshiped. Followed by speech from the trustee – Dr Bhimabhai Odedra. The program details were given by young volunteer Dharmesh Chotaliya .
There was a small presentation to local police officer who helped with the procession by closing the roads and providing escort.
The record breaking ladoo ingredients were provided by Swastik Traders and Millers – Mr Pratpbhai Khunti and family. Details of the ladoo making were presented by Ram Odedra.
Shastree Shri Dilipbhai Joshi, summarised the Shree Ganesh Puran follwed by offering of the Largest Ladoo to lord Ganesh and followed by distribution to all devotee as a prasad.
All devotees had Maha Prasadam.
This event was covered by several media teams, including BBC Televiosion , BBC Radi, Leicester Mercury, Sanskar Radio, BBC Asian Network, Pukaar News, Sabraas Radio, Ajj Kal and Nobat from India.
Also news was covered by the Hindu Community of Kenya.