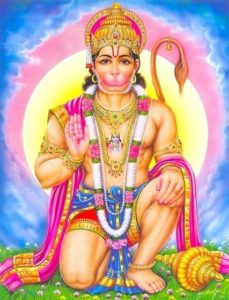 Lord Hanuman or Hanumanji (हनुमान जी) is known by many names as Anjaneya, Anjani Putra, Bajarangabali, Hanuman, Mahaveer, Maruti, Pavanputra etc. Hanuman, the monkey god, is the son of Vayu or Marut, the wind god. Hanuman’s mother is Anjani. Hanuman was the chief of the armies of Shree Ramachandra and took a prominent part in the war against Ravana, the king of Lanka, in the Indian epic poem Ramayana. Hanuman helped restore Shree Sitaji back to Shree Rama.
Hanuman, worshipped for his strength, valour, agility, is a man of great learning. He is considered to be an avatar (incarnation) of Lord Shiva. Hanuman, a great devotee of Shree Rama, is the symbol of devotion and dedication. Hanuman carried Shree Rama and Lakshmana on his shoulder when they were in search of Sugreeva, the king of Vanarav in Kishkindha and helped them to find Sita. Prior to the war between Shree Rama and Ravana, Anjaneya visited Lanka, met Ravana, created havoc and burnt down the city of Lanka (Lanka Dahan). During the war, when Lakshmana was injured seriously, Sushena, the surgeon/physician of the monkey army, dispatched Maruti to bring herbal medicine, Jadi Buti, from the far-off Sanjeevini mountain in the Himalayas, before sunrise. Flying over the Himalayas and unable to identify the particular herb fast, Hanuman uprooted and carried the entire Sanjivini mountain in time to save the life of Lakshmana. Hanuman was blessed by Shree Rama with immortality (chiranjeevi).
Hanuman was a bachelor and is worshipped in all the temples of India. Every temple of Sri Rama contains an icon of Hanuman. Worship of Sri Rama is complete only with the worship of Hanuman. Sant Tulsidas composed the 40 stanzas of Hanuman Chalisa in praise of Hanuman. Hanuman Jayanti is the birth anniversary of Lord Hanuman. One cannot understand Hindu Dharma unless one knows Hanuman – the embodiment of servitude.
We now present three different mantras or prayers of Lord Hanuman.
> Listen to  Hanuman beej mantra audio mp3 (250K)

We pray to the Lord Hanuman, who is the greatest server and messenger of the Lord incarnate, Shree Rama.
> Listen prayer for Lord Hanuman हनुमान मंत्र (mp3 170K)

Let me pray to the one who is swift as thought (manojavam-), the one who is more powerful than the wind (marut.tulya.vegam-), the one who has conquered his senses (jitendriyam-), the one who is supreme among all intelligent beings, the son of the wind-god (vaataatmajam-), the commander of the army of forest creatures (vaanar.yooth.mukhyam-), Let me find refuge in Lord Rama’s Messenger, the incomparable Lord Hanuman. Please accept me and my prayers at your feet.

> Listen to another Invocation of Lord Hanuman (mp3 204K)