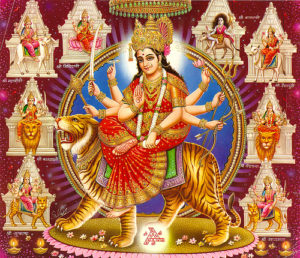 Nava – that also means ‘new’ – denotes ‘nine,’ the number to which sages attach special significance. The Hindu goddess Durga has nine manifestations: each goddess has a different form and a special significance.
1. Shailaputri
Shailaputri, literally means the daughter of the mountains. Variously known as Sati Bhavani, Parvati or Hemavati, the daughter of Hemavana – the king of the Himalayas, she is the first among Navadurgas. The embodiment of the power of Brahma, Vishnu and Shiva, she rides a bull and carries a trident and a lotus in her two hands.
2. Brahmacharini
Brahmacharini, is the second form of Mother Goddess, and her name means one who practices devout austerity. She holds a rosary in her right hand and a water utensil in her left hand. Filled with bliss and happiness, she is the way to emancipation – Moksha
3. Chandraghanta

The third facet of Goddess Durga is Chandraghanta. She has a ‘chandra’ or half moon in her forehead in the shape of a ‘ghanta’ or bell. She is the apostle of bravery and possesses great strength to fight in the battle against demons.
4. Kushmanda
Kushmanda is the fourth form of the mother goddess. She is considered the creator of the universe. The universe was no more than a void full of darkness, until her light spreads in all directions like rays from the sun.
5.  Skanda Mata
The fifth aspect of the Mother Durga is known as Skanda Mata – the mother of Skanda or Lord Kartikeya, who was chosen by gods as their commander in chief in the war against the demons. Skanda Mata has four arms and three eyes, holds the infant Skanda in her right upper arm and a lotus in her right hand which is slightly raised upwards.
6.  Katyayani
The sixth form of Mother Durga is known as Katyayani. According to legend, she is the daughter of a great sage called Kata, who wished to have a daughter in the form of a goddess. Katyayani was born to Kata as an avatar of Durga.
7. Kaal Ratri
Kaal Ratri is the seventh form of Mother Durga. She has a dark complexion, disheveled hair and a fearless posture. She is black like Goddess Kali and holds a sparkling sword in her right hand battle all evil. Her gesture of protection assures us of freedom from fear and troubles.
8. Maha Gauri
Maha Gauri is intelligent, peaceful and calm. She wears white clothes, has four arms, and rides on a bull.
9. Siddhidatri
Siddhidatri is the ninth form of Goddess and has supernatural healing powers. She blesses all Gods, saints, yogis, tantrics and all devotees as a manifestation of the Mother Goddess.