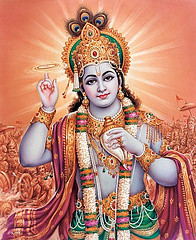 Janmashtami – Birthday of Lord Krishna
Janmashtami, the birth of Lord Krishna is celebrated with great devotion in the August/September months, on the Ashtami of Krishna Paksh or the 8th day of the dark fortnight in the month of Bhadon, in the whole of north India. Temples and homes are beautifully decorated and lit. An attractive feature of the celebrations are cribs & other decorations depicting stories of Lord Krishna’s childhood. There are five main “Jhankis” of Janmashtami which depict the entire sequence of events from Lord Krishna’s birth to his being discovered in Gokul.
The “Jhankis” include the birth of Krishna in jail, Vasudev carrying Krishna to safety across the river Yamuna amidst thunder and lightning, Vasudev’s return to the jail, Kansa killing Yashoda’s daughter and finally the little Krishna in the cradle in Gokul. “Jhankis” are created out of dolls dressed up as kids, men and women with lehangas, chunnis, dhotis & kurtas. Raslila of every type are also performed – Janmlila, Shankarlila, Putnalila and Naglila. In the evening bhajans are sung which end at midnight, the auspicious moment when Lord Krishna was born. Thereafter arti is done, prasad distributed and flowers showered on the idol.
Celebrations at Braj Bhoomi
Mathura, the birthplace of Lord Krishna, where his parents lived in captivity of the evil Kansa and he as a young boy came and vanquished his maternal uncle Kansa to ascend the throne and free his parents, celebrates Janmashtami with great enthusiasm. The main celebrations are performed at the Dwarkadhish temple, Mathura in the form of Jhulanotsava and the Ghatas during the entire month of Shravan. The ghatas are a unique feature of the month long celebrations. During the ghatas of a particular colour the whole temple is covered with decoration in the same colour. Even the Lord dresses up in the same colour. The twin cities of Mathura-Vrindavan takes on a festive look and spirit of devotion runs high among the people. It was on the banks of the Yamuna river where Lord Krishna played during his childhood and indulged in pranks and tricks with his friends and the gopies. There are about 400 temples dedicated to Lord Krishna in this sacred city and the major festivities are held at the Banke Bihari, Rangaji, Shri Krishna Balram temple and Gopinath temple. The Raslila of Braj is thematically the basis of many performing arts.
Lord Krishna was born in the Dwarapa Yug which came just before the Kali Yug and Janamasthami, his birthday falls on the Ashtami Paksh or the 8th day of the new moon fortnight in the month of Bhadra some time in July or August. The Jhankis ( tableaux) depicting many significant scenes from Lord Krishna’s life are the intrinsic part of Janmasthami. Devotees also make beautiful Jhulans (Cradles) for the baby Krishna. In some parts of India, young men break the Matkas (Earthen Pots) filled with butter and curds. The most important tableux is that of baby Krishna. A idol of baby Krishna is placed on a cradle, which is rocked to recreate scenes from Krishna’s infancy. The devotees believe that anyone who makes a wish and while rocking the cradle in which the Lord is, his or her wish will be granted on this day. Other popular Jhankis are Kaaliya Mardan(vanquishing the black snake Kali Nag), Kansha vadha ( Killing Kansha) and lifting the Govardhan Parbhat. 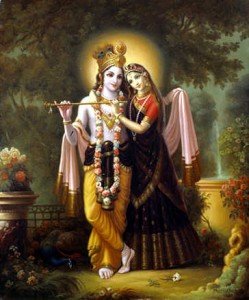 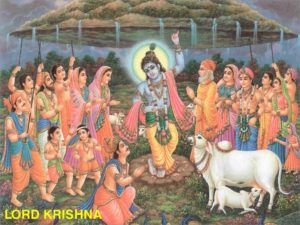 Kalia Mardan and the Lifting of Mt. Govardhan
Krishna continued to grow at Gokul. He acquired notoriety as a pilferer of milk and butter, but had endeared himself to the people of Gokul by his playfulness.
Among other things, he is said to have done at Gokul, he lifted Mount Govardhan to save the people of Gokul from a storm. He also tamed Kalia, a giant snake that lived in the Yamuna river and terrorised the people of Gokul. While still in his teens, Krishna came to Mathura where King Kansa had organised a wrestling tournament. Krishna participated in it and after defeating all the contestants, he challenged Kansa to a wrestling bout. The evil Kansa’s time was up: Krishna defeated him and killed him. The people of Mathura were relieved.

Another major event in Krishna’s later life was that he functioned as an adviser to the Pandavas and during the Mahabharata war between the Pandavas and Kauravas he was Arjuna’s (one of the five Pandava brothers) charioteer. The original recitation of the Bhagvad Geeta (Song of the Blessed Lord) is accredited to him. This document contains profound ideas on many issues touching on the temporal and non-temporal aspects of life.