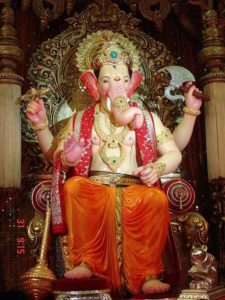 Lalbaugh Na Raja – Ganpati Bapa
Ganesh Chaturthi, the great Ganesh festival, also known as ‘Vinayak Chaturthi’ or ‘Vinayaka Chavithi’ is celebrated by around the world as the birthday of Lord Ganesh.
Shree Ganesh, the son of Shiva and Parvati, who bestow his presence on earth for all his devotees in the duration of this festival. Shree Ganesh who is the god of wisdom, prosperity and good fortune.
It is observed during the Hindu month of Bhadra (mid-August to mid-September) and the grandest and most elaborate of them, especially in the western India state of Maharashtra, lasts for 10 days, ending on the day of ‘Ananta Chaturdashi’.
The Grand Celebration
A life-like clay model of Lord Ganesha is made 2-3 months prior to the day of Ganesh Chaturthi. The size of this idol may vary from 3/4th of an inch to over 25 feet.
On the day of the festival, it is placed on raised platforms in homes or in elaborately decorated outdoor tents for people to view and pay their homage. The priest, usually clad in red silk dhoti and shawl, then invokes life into the idol amidst the chanting of mantras. This ritual is called ‘pranapratishhtha’. After this the ‘shhodashopachara’ (16 ways of paying tribute) follows. Coconut, jaggery, 21 ‘modakas’ (rice flour preparation), 21 ‘durva’ (trefoil) blades and red flowers are offered. The idol is anointed with red unguent or sandal paste (rakta chandan). Throughout the ceremony, Vedic hymns from the Rig Veda and Ganapati Atharva Shirsha Upanishad, and Ganesha stotra from the Narada Purana are chanted. 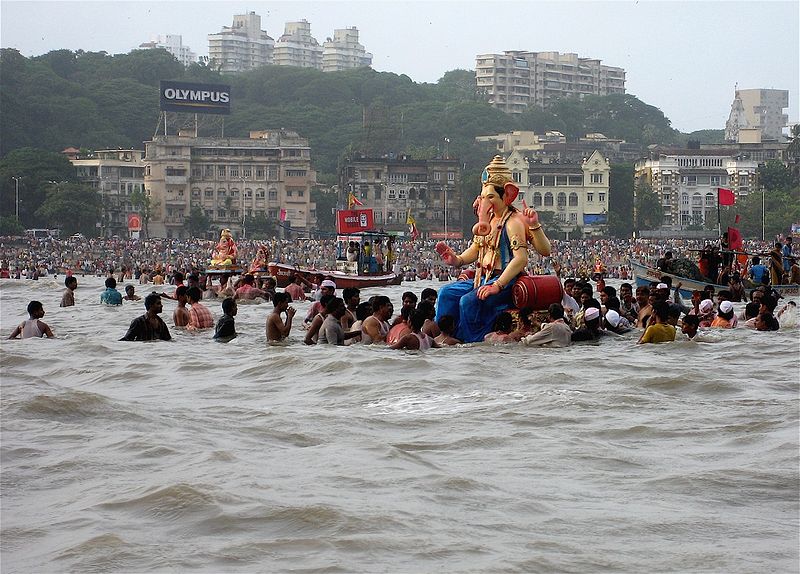 Visarjan
For 10 days, from Bhadrapad Shudh Chaturthi to the Ananta Chaturdashi, Ganesha is worshipped. On the 11th day, the image is taken through the streets in a procession accompanied with dancing, singing, to be immersed in a river or the sea symbolizing a ritual see-off of the Lord in his journey towards his abode in Kailash while taking away with him the misfortunes of all man. All join in this final procession shouting “Ganapathi Bappa Morya, Purchya Varshi Laukariya” (O father Ganesha, come again early next year). After the final offering of coconuts, flowers and camphor is made, people carry the idol to the river to immerse it.
The whole community comes to worship Ganesha in beautifully done tents. These also serve as the venue for free medical checkup, blood donation camps, charity for the poor, dramatic performances, films, devotional songs, etc. during the days of the festival.
Do Perform
On the Ganesh Chaturthi day, meditate on the stories connected with Lord Ganesha early in the morning, during the Brahmamuhurta period. Then, after taking a bath, go to the temple and do the prayers of Lord Ganesha. Offer Him some coconut and sweet pudding. Pray with faith and devotion that He may remove all the obstacles that you experience on the spiritual path. Worship Him at home, too. You can get the assistance of a pundit. Have an image of Lord Ganesha in your house. Feel His Presence in it.
Don’t forget not to look at the moon on that day; remember that it behaved unbecomingly towards the Lord. This really means avoid the company of all those who have no faith in God, and who deride God, your Guru and religion, from this very day.
Take fresh spiritual resolves and pray to Lord Ganesha for inner spiritual strength to attain success in all your undertakings. May the blessings of Sri Ganesh be upon you all! May He remove all the obstacles that stand in your spiritual path! May He bestow on you all material prosperity as well as liberation!