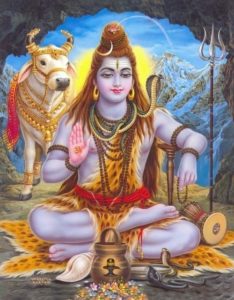 Summary of the Maha Mrityunjaya Mantra
We worship Shiv – The Three-Eyed (tryambakam) Lord (yajamahe);
Who is fragrant (sugandhim) and nourishes (pushti) and grows (vardhanam) all beings.

As the ripened cucumber (urvarukamiva) is automatically liberated (bandhanaan) (by the intervention of the “farmer”) from its bondage to the creeper when it fully ripens;
May He liberate us (mokshiya) from death (mrityor), for the sake of immortality (maamritaat).
We pray to Lord Shiv whose eyes are the Sun, Moon and Fire
May He protect us from all disease, poverty and fear
And bless us with prosperity, longevity and good health.
The Maha Mrityunjaya Mantra is a prayer to Lord Shiv (part of the hindu trinity, the lord of destruction, penance and meditation) for help in overcoming “death”. The seeker is more concerned with avoiding spiritual “death” rather than physical “death”. The mantra is a request to Lord Shiv to lead us to the mountain of meditation, which is indeed Lord Shiv’s abode.
Legend has it that Lord Shiv appeared before his devotee Markandeya (who was destined to die at the age of sixteen) and stopped his aging process a few days before he was supposed to turn sixteen. Thus, death would never be able to claim him. Hence, this mantra is also referred to as the Markandeya mantra in Hindu studies. The mantra should ideally be repeated 108 times, twice daily, at dawn and at dusk. It is particularly useful for meditation and yoga practice.
Spiritual Significance of the Shiv Mahamantra
Lord Shiv is referred to as tryambakam, the three-eyed one, because his third-eye has been “opened” by the powers of penance and meditation. The third eye is said to be located in the space between the eyebrows, and is “opened” when one experiences spiritual awakening. So, when we pray to Lord Shiv, we are in essence asking for his blessings and assistance in opening our third eye of spiritual knowledge.
The natural consequence of this awakening is that we will be led towards spiritual liberation or moksha, and attain freedom from the cycles of death and rebirth. The goal of chanting this mantra is to spiritually “ripen” so that we can free ourselves Lord Shiv can free us from our bondage to all the material things that bind us!
> Listern to Maha Mritunjaya Mantra Audio mp3