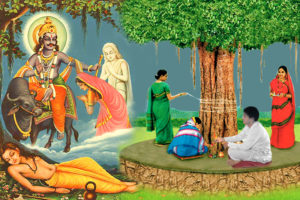 Vat Purnima Vrat is a significant Hindu festival celebrated by married women observing fast for their husbands’ long life and wellness. Vat Purnima which is also called Vat Savitri is dedicated to Savitri who saved her husband Satyavan from the God of Death, Yama himself.  According to Hindu calendar, the auspicious festival is observed on Purnima or full moon of Jyestha by married women in the Western Indian states of Gujarat, Maharashtra and Karnataka. Vat Purnima Vrat Puja Vidhi is same as that of Vat Savitri with women tying a ceremonial sacred thread around a banyan tree, keeping fast and listening to Savitri-Satyavan Katha in Hindi.

Vat Savitri Vrat as the name suggests is kept in honour of Savitri, a determined married woman who fought for her husband’s life and got it back from Lord Yama. Vat means Banyan tree holds a significant place as it was under this tree Savitri got her husband’s life from the clutches of death. Vat Savitri Vrat or Savitri Brata which is observed on Amavasya by married women from Orissa, Bihar as well as Nepal following the Purnimanta calendar.

The story of Satyavan and Savitri is a sub plot in the Mahabharata. King Ashtapati had a beautiful and intelligent daughter named Savitri. The King gave her the permission to choose her husband. One day, Savitri met a young man in the forest who was carrying his blind parents in two baskets balanced on either side of a stick. The young man was Satyavan.
Impressed by Satyavan’s devotion towards his blind parents, Savitri decided to marry him. On enquiry, the King found out from Sage Narada that Satyavan was the son of a deposed king and that he was destined to die in a year. King first refused to give permission for the marriage but Savitri was adamant. Finally, the King relented and the marriage was conducted and the couple left for the forest.

They led a happy life and soon a year passed. Savitri realized that the date Sage Narad had predicted that Satyavan would die will fall in three days-time. Three days before the predicted day of death of Satyavan, Savitri started fasting. The day Satyavan was destined to die, Savitri followed him to the forest. While cutting woods from a Vat Vriksha (Banyan Tree), he fell down and fainted. Soon, Savitri realized that Satyavan is dying. Suddenly she felt the presence of Yama, the god of death. She saw him carrying the soul of Satyavan and she followed Yama.

Yama first ignored Savitri thinking that she will soon return back to her husband’s body. But she persisted and kept on following him. Yama tried few tricks to persuade her but nothing worked. Savitri remained adamant and said that she will follow her husband where ever he goes. Then Yama said that it is impossible for him to give back the dead as it is against the nature’s law. Instead, he will give her three boons and she should not ask to return her husband’s life as a boon. Savitri agreed.

With the first boon she asked that her in-laws be reinstated in their kingdom with full glory. With the second boon she asked for a son for her father. Finally, for the third boon she asked ‘I would like to have children.’ Yama immediately said ‘granted.’ Then Savitri said, ‘now that you have granted me the boon of having children please return my husband as I can only have children from him.’ Soon Yama realized that he had been tricked by Savitri, a pativrata.

Yama remained silent for a minute and then smiled and said ‘I appreciate you persistence. But what I liked more was you readiness to marry a man whom you loved even though you knew that he would only live for a year. Go back to your husband he will soon wake up.’ Soon Savitri returned to the Vat Vriksha were her husband was lying dead. She started going round (pradakishna) the Vat Vriksha and when she completed the pradaksihna, Satyavan woke up as if from sleep. Soon Savitri and Satyavan were reunited.

Married Hindu women observe this festival worshipping Savitri as the goddess. On the day of festival, the women take holy bath in the early morning as purification and wear new colourful clothes, bright bangles and apply vermillion on their forehead. They adorn one leaf of banyan in their hair. Women offer 9 types of fruits and flowers to Goddess Savitri. Wet pulses, rice, mangos, jackfruits, palm fruits, kendu, bananas and several other fruits are offered as Bhoga (offering) and observe the festival with Savitri brata katha. After the fast is over, they consume bhogal and take blessings from the husband and elders in the house.