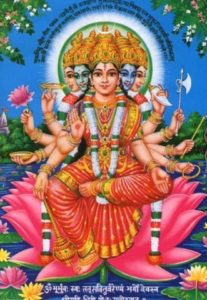 Gayatri Mantra
AUM BHOOR BHUWAH SWAHA,
TAT SAVITUR VARENYAM
BHARGO DEVASAYA DHEEMAHI
DHIYO YO NAHA PRACHODAYAT.
Summary of the Gayatri Mantra
Gayatri Mantra (the mother of the vedas), the foremost mantra in Hinduism and Hindu beliefs, inspires wisdom. Its meaning is that “May the Almighty God illuminate our intellect to lead us along the righteous path“. The mantra is also a prayer to the “giver of light and life” – the sun (savitur).
Oh God! Thou art the Giver of Life,
Remover of pain and sorrow,
The Bestower of happiness,
Oh! Creator of the Universe,
May we receive thy supreme sin-destroying light,
May Thou guide our intellect in the right direction.

Gayatri, the five-faced Goddess, is said to have domain over the five senses or pranas, and protects these five life-forces of those who chant the Gayatri Mantra. In her role as the protector, Gayatri is referred to as Savitri.
Word for Word Meaning of the Gayatri Mantra
Aum = Brahma ;
bhoor = embodiment of vital spiritual energy(pran) ;
bhuwah = destroyer of sufferings ;
swaha = embodiment of happiness ;
tat = that ;
savitur = bright like sun ;
varenyam = best choicest ;
bhargo = destroyer of sins ;
devasya = divine ;
these first nine words describe the glory of God
dheemahi = may imbibe ; pertains to meditation
dhiyo = intellect ;
yo = who ;
naha = our ;
prachodayat = may inspire!
“dhiyo yo na prachodayat” is a prayer to God
Hence the Gayatri is unique in that it embodies the three concepts of stotra (singing the praise and glory of God), dhyaana (meditation) and praarthana (prayer).

Origin, Benefits and Chanting of the Gayatri Mantra
The Vedas are widely considered to be the source of all true knowledge, the word “Veda” itself meaning “Knowledge”. Gayatri Devi also gave to mankind the “Gayatri Mantra”, also known as the “Guru Mantra” or the “Savitri Mantra”. It is one of the oldest mantras, and generally thought of as being amongst the highest and most powerful mantras of all. This mantra is therefore often referred to as “the Mother of the Vedas”. In the Bhagavad Gita, Lord Krishna had proclaimed to Arjuna – “Among all the mantras, I am the Gayatri”.
Rishis selected the words of the Gayatri Mantra and arranged them so that they not only convey meaning but also create specific power of righteous wisdom through their utterance. The ideal times for chanting the mantra are three times a day – at dawn, mid-day, and at dusk. These times are known as the three sandhyas – morning, mid-day and evening. The maximum benefit of chanting the mantra is said to be obtained by chanting it 108 times. However, one may chant it for 3, 9, or 18 times when pressed for time. The syllables of the mantra are said to positively affect all the chakras or energy centres in the human body – hence, proper pronunciation and enunciation are very important.
Chanting of Gayatri Mantra removes all obstacles in our path to increased wisdom and spiritual growth and development. The teachings and powers incorporated in the Gayatri Mantra fulfill this purpose. Righteous wisdom starts emerging soon after Jap(recitation) of the Gayatri Mantra is performed. Sathya Sai Baba teaches that the Gayatri Mantra “will protect you from harm wherever you are, make your intellect shine, improve your power of speech, and dispel the darkness of ignorance (Dhiyoyonah prachodayaath)”.
References to the Gayatri Mantra in Scriptures
>Gayatri Mantra by Anuradha Paudwal(218K, 28sec)
The Upanisads (secret texts) of Hinduism contain several references to the Gayatri Mantra.
Chandogya Upanisad 3.12.1,2,5 (Qualities of Gayatri)

Brahadaranyaka Upanisad 5.14.4 (Gayatri as the Protector)
The Gayatri Mantra is based on truth. For truth is based on strength. Strength is breath, and is based on breath. So, Gayatri protects (tra) the wealth (gaya) (the breath!) of those who speak it with earnestness and devotion. When one recites Gayatri on behalf of someone, it protects that person’s breath too!
Brahadaranyaka Upanisad 5.14.5 (Four ‘foots’ of the Gayatri)
This verse talks about the unbounded wealth contained within the four ‘foots’ of the Gayatri Mantra.
The first foot (aum bhur bhuvah svaha) is said to be equivalent to the wealth contained in the three worlds put together.
The second foot (tat savitur varenyam) is said to be equivalent to the wealth contained in the three main vedas.
If one were to receive a gift extending as far as there are living beings, that would equal the third foot (bhargo devasaya dheemahi).
The fourth foot (dheeyo yo nah prachodyaat) is based on the glory of the sun, whose power and wealth remains unequaled and unrivaled. Hence, there is no amount of wealth that can equal the fourth foot of the Gayatri!
Gayatri Mantra – Long Form and Praanayama
The complete form (or long form) of the Gayatri Mantra contains an invocation to the seven spheres, followed by the traditional 24-syllable mantra that is most commonly chanted (Details of each syllable can be found in the Gayatri by Words article). The final part of the mantra is an invocation to the Goddess of light to illuminate our path as we move towards higher consciousness.

AUM bhUH, AUM bhuvaH, AUM svaH, AUM mahaH
AUM janaH, AUM tapaH, AUM satyam
AUM tatsaviturvarenyM bhargo devasya dhImahi
dhIyo yo nH prachodayAt.h.
AUM Apo jyotiH rasomRRitaM
brahma bhUR bhuvaH svar AUM..
AUM, the primordial sound, resides in all elements of the universe. It permeates the earth (-bhUH), water (-bhuvaH), fire (-svaH), air (-mahaH), ether (-janaH), intelligence (-tapaH) and consciousness (-satyam). We pay homage to Gayatri, the one who shines like the sun (tat savitur), the one who destroys all our sins through her everlasting and effulgent light. Dear Goddess Gayatri, please illuminate our path towards our higher consciousness and lead us to our true purpose in life. Please shine your light (-jyotiH) in our path so we may partake of the everlasting nectar (rasomRRitaM) of brahman while chanting the primordial sound, AUM!
Gayatri Praanayama (mp3 extract, 30sec, 220K)
The Gayatri Mantra CD by Pandit Jasraaj and Rattan Mohan Sharma includes a 40+ minute rendition of repeated chants of the Gayatri Mantra. It is perfect to play in the background for your meditations.
Gayatri Mantra – Mantra or Prayer?
The Gayatri Mantra occupies a unique place in that it has both the power of mantra and of prarthana (prayer). It is important then in considering the Gayatri Mantra to distinguish the difference between these two deceptively similar words.
A mantra may be articulate or inarticulate, or a combination of them, as with AUM. It has an inherent power, known as “Mantra shakti”, which has a positive influence not due to any philosophical meaning behind the mantra, but simply due to its utterance alone.
A prayer on the other hand does have a philosophical meaning behind it, and it is generally through this meaning that the prayer or prarthana has its power. Since this meaning can be easily understood, the method of prarthana is generally the form of worship used by most people.
The Gayatri, or Guru Mantra possesses both the power of mantra and the power of prarthana, and thus has both an intrinsic power (ie “mantra shakti”), through its mere utterance alone, and also an instrumental power (ie “prarthana shakti”), which is derived from the understanding of its meaning and philosophical significance. Hence, the repeated and correct chanting of the Gayatri Mantra, with proper understanding of its meaning, is believed to be of the greatest good to the individual.