The plight of the Yezidi people unlamented & unresolved genocide

You are here:
Events 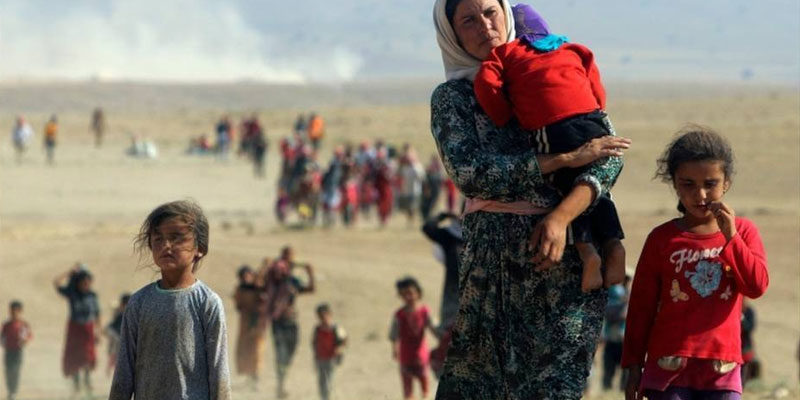 The plight of the Yezidi people unlamented & unresolved genocide

There have been numerous genocidal attempts to eradicate the Yezidis throughout their history.

Matthew Travis Barber is a PhD student studying Islamic thought and history in the Department of Near Eastern Languages and Civilizations at the University of Chicago. Matthew was living in Iraq and performing research within the Yazidi community in 2014 when the Islamic State organization conquered significant portions of the country and began the Yazidi Genocide.

For the next several years, Matthew worked at the heart of the response to the Yazidi Genocide and served in Iraq for one year (2015-2016) as the executive director of Yazda, spearheading humanitarian projects and human rights advocacy for the Yazidis. These efforts involved mobile medical services in Sinjar Mountain, medical services in KRI-based camps, shelter and winterization for displaced families in Sinjar, food aid, livelihood assistance, support for rescued female survivors, genocide documentation (including the first public report on mass graves in Sinjar), educational projects (including the building of a school in Sinjar), and a program to preserve Yazidi religious and cultural tradition.

Thomas “Tom” Holland is an English writer and popular historian who has published best-selling books on topics including classical and medieval history and the origins of Islam. He has worked with the BBC to create and host historical television documentaries.

Tom is the presenter of BBC Radio 4’s Making History. He has written and presented several TV documentaries, for the BBC and Channel 4, on subjects ranging from ISIS to dinosaurs.

He served two years as the Chair of the Society of Authors and is Chair of the British Library’s PLR Advisory Committee.

Anne Norona is founder of Yezidi Emergency Support (Y.E.S) www.yezidiemergencysupport.com and works as a practice nurse in Cornwall. Anne has spent the last 4 years working consistently with Yezidis both abroad and in Iraq and has visited Sinjar and Kurdistan many times.

Anne has a deep understanding of the way Yezidis have to live today, the complexities of working and living in the region and knows only full well how they live and suffer.

Prof. Robins main areas of interest are orality, literacy and popular culture across the Middle East and especially amongst the Kurds. Much of her written work has focused on the Yezidis, a Kurdish religious minority. She is currently preparing a book on discourses of memory in Kurdish communitie

Salwa Khalaf – A survivor of ISIS captivity, Salwa Khalaf wants the world to understand what happened to the Yezidis and to bring attention to the horrific suffering which continues for the 3,000 Yezidi women and children remaining in captivity today.

Gautam Sen, Ph.D. taught international political economic for more than two decades at the London School of Economics to graduates, as the Course Director for the Masters in Politics of the World Economy, at the London School of Economics and Political Science. An author and prolific contributor to various media outlets, he is now Director of the Dharmic Ideas and Policy Foundation. He has recently written on Sino-Russian policy towards South Asia in the Sunday Guardian of India and on the socioeconomic dynamics of Indian political change as well as the crisis of the global economy in Fortune.

Dr. Sen has advised the prime ministers on Indian and Nepal on economic policy issues and was senior consultant to the UNDP for several years. He was also appointed by the Prime Minister of India as member of the ’eminent persons group’ of the Indo-UK Round table (2001-2004).

How can I contact the organiser with any questions?

Do I have to bring my printed ticket to the event?

Yes – can be printed or on your phone as a copy