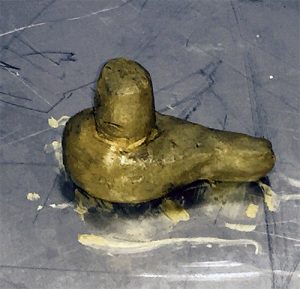 Parthiv Shiv Lings will be made by yajman and ceremony will be performed by Mandir’s Maharaj/ Shastriji. Ceremony will take every day in the morning and at end of the Shravan Mas all Parthiv Shivlings will be taken to either Seaside or a river for visarjan.

If one wishes to attain happiness and be prosperous, he must pray to Lord Shiv. Lord Shiv is the Lord of all the studies (sarvavidyalu), pancha bhootalu (5 elements). He is the also the supreme among the trinity. In this human life we commit numerous sins and to get liberation for the sins committed it is highly recommended to do Lord Shiv’s puja with complete dedication and follow the right path thenceforth.

Lord Ram after the defeating Ravan; in a place called Rameshwaram (Tamil Nadu, India)  installed a Parthiv Ling (Ling made of sand) to get rid of a sin called Brahmahatya (sin of killing a Brahmin); this was mentioned in Purans and Ramayan.

Even today many people visit that shrine and its always very divine. According to ancient Hindu scriptures, many devotees had been gifted liberation from the cycle of Life & Death.

Parthiv Shiv Ling also known as Saikata Ling means Ling made with Mud/Sand (Parthiv meaning Earth). That is why when Lord Shiv is prayed in the form of a Ling which is directly made out of Sand/Mud is more valuable, divine, pure and sacred than the ones we pray which are made of rock or Mercury. This is the reason people who have Nav-grah Dosh, Shani Dosh, problems  due to their kundali can follow the puja vidhi to help over come their problems.
Parthiv Shiv Ling Pooja at 12 powerful Jyotirlings is considered to be very beneficial for fulfilling any desires and for Grah Shanti.

Jyotirlings are considered to be very powerful places on earth. There are only 12 such Jyotirlingas in the world- Omkareshwar, Mahakareshwar,Baidyanath Dham, Bhimashankar, Somnath, Rameshwaram, Nageshwar, Vishwanath, Triambkeshwar Kedarnath, Ghushmeshwar and Srisailem. It is said that a visit to the Jyotirlings helps you attain Moksha! Millions of people visit Jyotirlings every year and find peace, happiness and feel immensely blessed and rewarded by Lord Shiv.

Parthiv Shivling Pooja at Jyotirlings for Shani Dosh Nivaran and Sakal Monokamana Siddhil. Once Lord Shani Dev informed Lord Shiv that he had to pass over Lord Shiv’s moon. Lord Shiv requested him not to but Shani Dev refused saying that it was his duty and if he spared Lord Shiv, it will be an injustice to the others and no one in the world would believe him! But, Lord Shiv is Shani Dev’s Guru, so Shani Dev had to oblige and promised him that he would gaze over his moon for just 3 hours 45 minutes. Lord Shiv agreed and thought Shani Dev could do nothing if he went for a bath for those hours. Lord Shiv took the form of a sadhu and went for his bath. On his way, he saw a watermelon seller (who was actually Shani Dev himself). He bought 2 juicy watermelons from the seller and kept them in his bag.

Meanwhile, the king’s sons were missing and his search party met Lord Shiv in the form of the sadhu. They saw blood dripping from his bag and ordered him to open it. Lord Shiv insisted that it was the watermelon juice, but they forcibly opened it and found the heads of the 2 princes! Alas, Lord Shiv was accused of murder and thrown into the dungeons. By the time the king realised that it was Lord Shiv himself, his sons returned because Lord Shiv’s Sade Sati was over. The king apologised to Lord Shiv. Lord Shiv explained that it was the negative effect of Saturn on his moon for a few hours that made his life unbelievably difficult. Lord Shani Dev then apologised to Lord Shiv profusely for gazing over his moon and returned to Shani Lok.

Imagine, if Lord Shiv’s life could be made so difficult for a few hours by Shani Dev, what about people with Shani Dosh and Sade Sati running in their lives for 7.5 years! People who pray to Lord Shiv during Shani Dosh period are blessed by Lord Shiv and find relief from it. Lord Shiv’s pooja at swayambhu 12 Jyotirlingas must be done to get rid of Shani Dosh. Since thousands of years saints and kings have done poojas in Jyotirlings for protection from Shani Dosh.

Parthiv Shiv Ling Pooja for Shani Dosh must be performed every month. It is done with 1325 Shiv Lings made of mud.
Puja Vidhi to be followed when Parthiv Shiv ling Pooja is done at Home. Those who has Nav-grah dosh, problems facing due to their kundali can follow below mentioned puja vithi in their house to get rid of their problems gradually.

The first and foremost rule/mandatory thing is get a Parthiv Ling done by a “BRAHMIN”  and to that Parthiveshwar do Sri Rudra Chamaka Purusha Sookta Dasashaanti and things to be used for abhishek are  Cow Milk, Cow Milk’s Ghee, Cow Milk’s Curd (since cow is considered very sacred) followed by Honey, Coconut Water, Various Fruit Juices, Sugarcane Juice, Sandalwood powder made into paste, Gangajal, Panneru (Rose Water/Fragrant Water) Vibhooti (Bhasmam) and last but not the least which has equal importance infact utmost importance are the patthiri (leaves) i.e Bili Patra (Bael Leaves),  Jammi Patthiri (Bulrush Leaves); coming to flowers Tellajilledu Flowers (White Madar Flowers) and with these if Abhishek is done to Parthiveshwar with Siva Sahasranaamas the problems in their houses can be solved.

Donating a cow is considered highly sacred and auspicious according to the Purans. So, praying or doing puja to Lord Shiv is equal to a count of donating 100 crore cows.